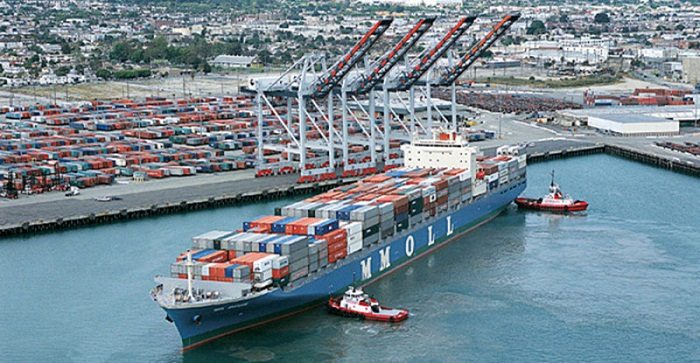 Infractions among security outfits at the Lagos Ports from which they illegally made N263billion, especially Messrs OMSL Limited without due course to the Nigerian established statutes has been uncovered.

ROYAL NEWS authoritatively gathered that the Senate has commenced the process of investigating the fraud.

Consequently, it mandated its committees on Navy, Marine Transport and Finance to investigate the activities of the company and other security agencies at the Safe Anchorage Area in the Lagos Ports who have made over N263billion illegally.

It also mandated the committees to unravel the lingering infractions amongst the agencies and deeper issues that have not yet been brought to fore.

These were sequel to a motion, titled, “Illegal Security Activities by Messrs OMSL Limited at the Safe Anchorage Area of Lagos Ports and the Need to Investigate their Excesses”,
sponsored yesterday by Senator George Sekibo (PDP Rivers East) during plenary.

Sekibo in the motion submitted that a security company registered in the name of OMSL Limited, has since 2014, carried out provision of security of the Lagos Ports Safe Anchorage Area on fees from Vessels without regard to the Nigerian Ports Authority who by the Ports Act of 1954 has the responsibility of the area.

He said: “OMSL Limited charged every ship that anchored within the Safe Area $2,500 on first day of Anchorage and $1,500 on every subsequent day for the period any ship stayed at the Anchorage Area.

He added that “with estimated number of ships that stayed at the Safe Anchorage Area in a year to be 3, 665, a whooping sum of $733.04million or N263.89billion have been collected by OMSL Limited and its collaborators over the years.”

“OMSL Limited in connivance with other security agencies are collecting a whooping sum of $133.28 million or N47.98billion every year from 2014, meaning that over $733.04 or N263.89billion have been collected by OMSL Limited and its collaborators,” he alleged.

He explained further that by virtue of the Ports Act (1954), the Anchorage Area is an integral part of Nigerian Ports Authority, NPA statutory responsibility while NIMASA, Marine Police and Nigerian Navy have the responsibility of ensuring safe and secured Nigerian territorial waters.

Virtually all the Senators who contributed to debate on the motion like Bassey Akpan , Mathew Urhoghide, Uche Ekwunife etc, supported the motion and the prayers it sought for.

The President of the Senate , Ahnad Lawan , in his remarks after the adoption of the prayers , mandated the committees to be led by the committee on Navy, to carry out thorough investigation on the alleged illegal activities at the Ports and report in four weeks time .