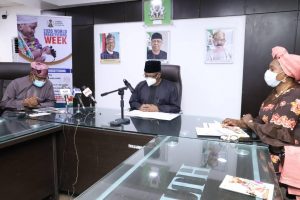 The Minister of State for Health, Dr Olorunnibe Mamora, on Thursday pleaded with the striking resident doctors to be patient with the Federal Government.

Mamora made appeal at the official inauguration of the state-of-the art Modular Theatre Complex and Amenity Ward at the National Orthopaedic Hospital, Igbobi, (NOHIL), Lagos.

In spite of the meeting with the Federal Government delegation to resolve pending issues, the National Association of Resident Doctors (NARD) on Thursday commenced an indefinite nationwide strike.
The NARD had threatened to commence an indefinite strike on Thursday if the Federal Government fails to meet its demands including non-payment of allowances.

The minister said that the Federal Government was doing all within its power to ameliorate and improve their welfare within its limited resources.

“I want to appeal to our colleagues, the resident doctors, to please bear with the government, we appreciate what they have been doing.

“We are going to support them and resolve their issues, and we will continue to work together for the good of Nigerians.

“I can say with all modesty that government is truly concerned with the welfare of the striking doctors and we are doing all within our powers to see to their welfare.

“The government team has been having meetings with them up to 12.00 a.m today and am sure that all their demands will be looked into by the government in the shortest time possible,” he said.

Mamora said that government would continue to improve on the existing medical infrastructure while embarking on new projects to complement them.

“The present day government will continue to do its best in the provision of adequate healthcare infrastructure and personnel,” he said.

Copyright 2022 ROYAL NEWS. All rights reserved. Digital material on this website, may not be published, reproduced, broadcast, rewritten or redistributed in whole or in part without prior express written permission from ROYAL NEWS.