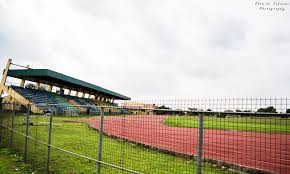 The fifth edition of the National Youth Games will kick-off tomorrow (Tuesday) at the University Sports Stadium, ROYAL NEWS has gathered.

Top Music star, Small Doctor ,will be entertaining sport fans during the opening ceremony with his hit songs.

The Minister of Youth & Sport Development, Mr. Sunday Dare, is expected to flag off the games, which will run for seven days.

Mr. Dare will be attending the first National Youth Games in his capacity as Sport Minister after attending the 2019 All African Games in Morocco where Team Nigeria claimed the second position.

In a chat with Unilorin Bulletin in her office last Wednesday (September 4, 2019), the Director of Sport, University of Ilorin, Prof. Olufunmilola Dominic, assured participants that adequate preparations have been made towards the successful hosting of the games.

Prof. Dominic disclosed that the University had ensured proper maintenance of its facilities, adding that the courts for Squash & Volleyball Beach are ready and will be used for the competition.

She disclosed that the 36 states of the federation and the FCT will be competing in 34 sporting events. These include Gymnastics, Table Tennis, Para-Table Tennis, Badminton, Boxing, Basketball, Chess, Cricket, Cycling, Handball, Hockey, Judo, Golf, Wrestling and Taekwando.

Prof. Dominic also disclosed that adequate accommodation and security arrangements have been made while the Medical Team will be ready to attend to any emergency health challenges that may arise during the competition.

It will be recalled that in May this year during a joint technical meeting of all the States’ Directors of Sports at the University Auditorium, the Vice-Chancellor, Prof. Sulyman Age Abdulkareem, promised to give special admission consideration to any of the athletes who performs exceptionally well during the games.

In his remarks on the occasion, the Director of Grassroots Sports in the Federal Ministry of Sports, Dr. Ademola Are, thanked the University of Ilorin for being a good host over the years, saying that the game is being held at the institution because previous hostings had been good.

The Chairman of the Sports Directors Association, Coach Tunde Kazeem, who spoke on behalf of the other States’ Sport Directors, thanked the University for hosting the last three editions of the games.