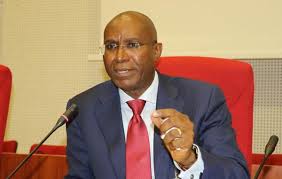 Deputy President of the Senate, Senator Ovie Omo-Agege has said that over $20billion in estimated revenues has been lost in the last 15 years that the Brass LNG project in Bayelsa State was abandoned.

According to Senator Omo-Agege, the need to ensure that the over $1 billion invested in the Brass LNG Project in Brass Island does not go to waste also constitute part of reasons why he is giving firm support towards the project’s revival.

A press statement signed by the Deputy Senate President’s Special Adviser on Media and Publicity, Mr. Yomi Odunuga on Wednesday expressed Senator Omo-Agege’s concerns and called for nationwide support towards reviving the project and realizing advantages that include 18,000 potential job opportunities.

“I will continue urging all my colleagues and fellow citizens to support the motion presented by Senator Degi; timely action on this project will do us all a world of good.

“There are clear indications that the project sited on 606 hectares of land would have been yielding additional 10 million metric tons of gas annually, with possibilities of recouping some $16 billion investment within the first five years of completion.

“In advocating for the relocation of oil companies’ headquarters to the Niger Delta, I have stressed various potential benefits; if all Nigerians can rally support towards the Brass LNG project’s actualization, a lot can be done to improve lives in the Niger Delta and other parts of the federation.

“Benefits derivable from the Brass LNG project include accelerated economic multiplier effects from multimillion dollar additional natural gas income, reduction in gas flaring as well as the creation of thousands of jobs for youth from the Niger Delta and other parts of Nigeria,” he stated.

During the Senate’s sitting on Tuesday, Senator Omo-Agege rose stoutly in support of a motion moved by Bayelsa State Deputy Governor-Elect, Senator Degi-Eremienyo Biobarakuma on the need to ensure immediate revival of the Brass LNG Project in Brass Island, Bayelsa State.

Following the intervention of Senator Omo- Agege and other Senators, the Senate resolved to commend the Federal Government over the work began since 2004 and invite the management of both NNPC and Brass LNG to brief the Senate Committee on Gas Resources on the extent of implementation.

The Senate further urged the Federal Government to facilitate other companies’ entry towards taking up the 17% shares each previously owned by Conoco Philips and Total which pulled out of the project at an early stage.