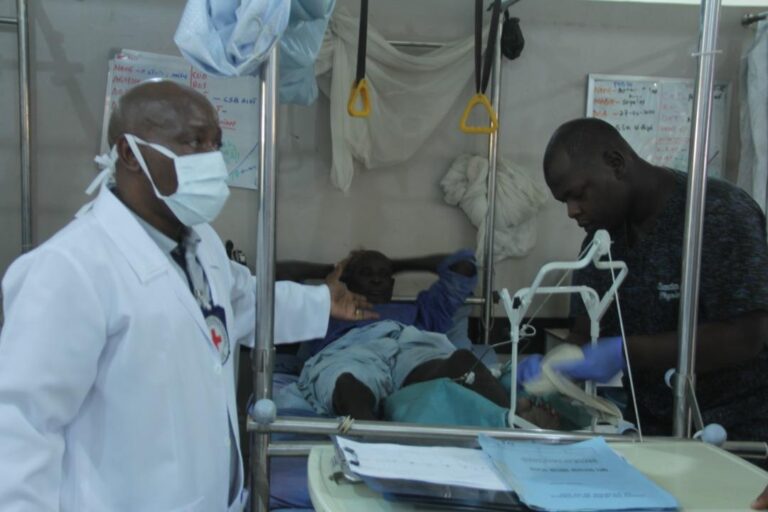 At least 9,150 patients received surgical care from the International Committee of the Red Cross (ICRC) in Maiduguri in the last 18 months, its Head of Delegation, Mr Eloi Fillion, said on Monday.

Fillion told ROYAL NEWS in Maiduguri that no fewer than 7,700 patients received surgical care from the ICRC surgical team in 2019.

He said that the ICRC’s surgical team received more than 350 surgical admissions and carried out more than 1,450 surgical interventions in the first half of 2020

He said out of those received in the period, 11 patients in critical conditions were referred to the University of Maiduguri Teaching Hospital (UMTH) for further treatment.

He added that the surgical programme of the ICRC would stretch for a long time in Maiduguri because of its training component.

“It is not only meant to support emergency for people who needed to be treated, it is also a teaching programme for medical staff including surgeons here in Nigeria and abroad.

“We train on orthopaedic surgery and everything that goes around it; we train staff that will be sent abroad to work in similar circumstances.

He said the ICRC also opened the Maiduguri Physical Rehabilitation Centre (PRC) recently in collaboration with the UMTH to provide physical rehabilitation services.

According to him, the PRC will offer services in physiotherapy, prostheses (artificial limbs), orthoses (supportive braces) for upper and lower limbs, customised wheelchair fitting and walking aids.

“It will also offer services in mental health psycho-social support as well as offer accommodation for patients from outside Maiduguri in its 18-bed dormitory,’’ he said.

He told ROYAL NEWS that ICRC would still maintain its PRC domiciled at the Dala Orthopaedic Hospital in Kano.

“We will maintain our Kano centre for those from other parts of the northwest, but we don’t have so many war wounded patients there like we have in Maiduguri.

“Here in Maiduguri, we have more patients treated in our surgical ward and some of them that will need prostheses (artificial limbs) or orthoses (supportive braces) will be accommodated at the PRC,’’ Fillion added.

He said 314 patients were fitted with artificial limbs through the ICRC physical rehabilitation programme in 2019.

“More than 140 persons with disabilities benefitted from the ICRC-supported rehabilitation programme at the National Orthopaedic Hospital in Kano from January to June, 2020.

“No fewer than 67 assistive devices were produced, fitted and delivered to persons with disabilities in the same period,’’ he said.

Also in an interview with ROYAL NEWS, Dr Bhavna Chawia, a surgeon at the ICRC Surgical Ward at the specialist hospital, said the primary goal of the surgical programme was to treat victims of armed conflicts and other situations of violence.

“The programme is aimed at treating the war-wounded, offer life and limb saving surgeries; we also do emergencies for patients from the Internally Displaced Persons camps around the region.

“We have a lot of patients in the male ward that came in with orthopaedic trauma. This is where the role of psychotherapy comes early to assist in the procedures for rehabilitation,’’ She said.

She told ROYAL NEWS that some of the surgeries would involve amputation of limbs and that there was the need to rehabilitate such amputees.

“We have a PRC in Kano to where we used to refer the amputees to have access to mobility aids.

“With the inauguration of the new PRC in UMTH, it is going to be easier to refer our patients there. They don’t need to travel almost seven hours to get to Kano,’’ the surgeon said.

According to her, 70 per cent to 80 per cent of surgical interventions done by the ICRC Mobile Surgical Team are orthopaedic cases and limb injuries, while the remaining relate to abdominal and other areas of body.

The surgeon said the greatest challenge of the surgical programme was access to patients for timely intervention, adding that it could take two days to get some patients to the ward because of distance.

Copyright 2023 ROYAL NEWS. All rights reserved. Digital material on this website, may not be published, reproduced, broadcast, rewritten or redistributed in whole or in part without prior express written permission from ROYAL NEWS.

Related Topics:CareRed Cross
Up Next

Gaming Industry is veritable tool for states to increase revenue – Board