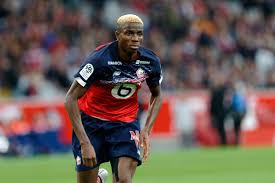 Punch reports that the club on their Twitter handle confirmed that he forward will be out of the important clash due to accumulated yellow cards.

“Due to an accumulation of three yellow cards in fewer than 10 games, (Victor) Osimhen will be suspended for the PSG versus Lille clash on November, 22,” the club tweeted.

The Nigeria international has been in superb form since joining the French side from Sporting Charleroi in the summer, scoring nine goals in 16 appearances with seven of the goals coming in the league in 12 appearances.

The 20-year-old scored his first goal away from home on Tuesday in the UEFA Champions League in a 4-1 loss to Valencia, his second goal of the UCL campaign.

Osimhen’s cautions came in against Angers, Nîmes and in their last league game against Marseille.

He will however be available for Saturday’s clash at home against Metz.