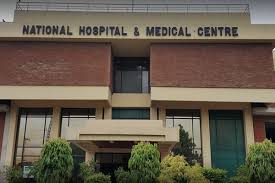 Over 3,0000 Kuchingworo residents have received free medical Check-up during a medical outreach programme to mark the 20th anniversary of National Hospital Abuja.

The Chief Medical Director of National Hospital Abuja, Dr. Jaf Momoh, while speaking to newsmen at a press briefing to mark the hospital’s 20th anniversary said the National Hospital management would not relent on its oars in ensuring every patient gets the best service delivery from the hospital.

According Jaff. “As a pioneer staff, I have had the rare honour to have witnessed the various developmental stages of the hospital with successive boards and respected senior colleagues who had steered the ship of the top management of this great institution.

“I acknowledge your various contributions towards the development of this citadel of excellence and the noble feats the hospital has attained. To the esteemed and invaluable staff of this hospital, I commend your immense efforts, toil and sweat to bring this hospital to a lofty height.

“The National Hospital started on September 1st, 1999, 20 years ago. The hospital started as a 200-bed hospital with approximately 400 staff, with about 30 specialists’ consultants.

“It is now a national center of excellence in cancer care, neonatology, in-vitro fertilization, trauma care with a sub-regional level 1 trauma center. Its services are now computerized.

The Chairman Governing Board of Abuja National Hospital Rt Hon. Olubunmi Patricia Etteh said the guidance and tremendous support given to the hospital by the Federal Government in the midst of dwindling financial resources is what has keptnit afloat.

Etteh, who was a former Speaker House of Representatives, said the present board was commissioned barely a year and a half ago, precisely on 6th March, 2018, and have recorded some modest achievements among which are: commissioning of national Cancer Centre, pgrade/expansion of private wing to ‘executive private wing’ for hospitalization of top Nigerians, Commissioning of 2 Linac Machines, Commissioning of CT Scanner, Provision of an archive for long-term documentation/record keeping as well as Slight dredging of Erosion Site.

The permanent secretary office of Secretary to the Government of the Federation SGF, Dr. Amina Shamaki, at the flag-off of the medical outreach in Kuchingoro Community, commended the management of the hospital for the gesture and said it would help in improving the health indices of people in the country.